The Yogic form of Bhagwan Shiv is omnipotent and symbolises control over the senses which every living being strives for. Signifying this vital aspect, each of his adornment has an attribute and a reason as to why he adorns them, out of which the sacred ash which he smears all over his body is one of the important one. The Shiv Puran mentions the reason as to why Bhagwan Shiv adorns ash on his body.

There once lived a Brahmin who came down from the lineage of Rishi Bhrigu. He lived a life of severe asterism. He hardly ate and whenever he ate it was only fruits. After sometime, he stopped eating fruits too, and only lived on green leaves. As he consumed only green leaves and nothing else, he came to be called Rishi Parnad. (Parn in Sanskrit meaning leaf)

Once when Rishi Parnad was cutting grass in his hermitage, he suddenly cut his middle finger. But instead of blood oozing out from the wound, he noticed a sapling of a tree coming out from his wound. That was because he had stopped eating food, and lived on green leaves, and hence there sprung a sapling from his finger.

Looking at this wonder, Rishi Parnad began to feel proud of his asterism. Pride entered in him and he began to think that this wonder happened because he was a pious and a sacred person. He began shouting in joy to the whole world thinking it to be his achievement. His shouts of pride and joy reached Bhagwan Shiv. Noticing his pride, Bhagwan Shiv decided to teach the Rishi a lesson that one should not be filled with pride. He came in guise of an old man to Rishi Parnad and asked him the reason for his happiness.

The Rishi replied that he was the most pious person in the world, as a sapling had emerged from his wound, instead of blood and he had become similar to the trees and plants. The old man smiles and asks as to what is so great in it. He states that not only the plants and saplings, but huge trees also when burnt, becomes ashes and those ashes are what remain at the end. Hence, there is nothing to feel great about this incident. Saying this, Bhagwan Shiv cut his middle finger and ashes emerged out of his hand. He then applies the ash all over his body and signifies that all life turns into ashes and gets merged in the Almighty. 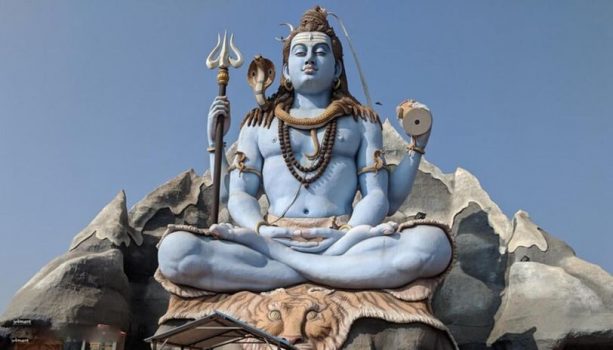 Rishi Parnad was shocked and surprised to see this and realised that the old man was none other than Bhagwan Shiv. He asked for forgiveness for his ignorance and sought refuge in Bhagwan Shiv. Since then, Bhagwan Shiv adorns ash on his body symbolising the feature that pride and arrogance have no value except to be reduced to ashes. It also signifies that spiritual state is more beautiful than the physical state of any living being.

The sacred Ash or Vibhuti is considered the most important one in the worship of Bhagwan Shiv. There are many benefits of applying the sacred ash. It cools down the heat of the body and keeps the mind clam, and hence it is applied on the forehead as a Tilak and on the hands and arms of the body. Thus, the sacred ash came to be the unique embellishment of Bhagwan Shiv and it shows that beauty lies in simplicity.