There is none greater than the Almighty and no power which supersedes him. He makes the rules and his greatness is that he never breaks them. He is the one who teaches life to follow and abide to the rules of creation so that one never forgets the respect for it. Not only teaching them, but he himself follows them setting an example to mankind that being powerful doesn’t mean mending or making situations advantageous to self, but winning them over with grit and determination while abiding to Dharma. 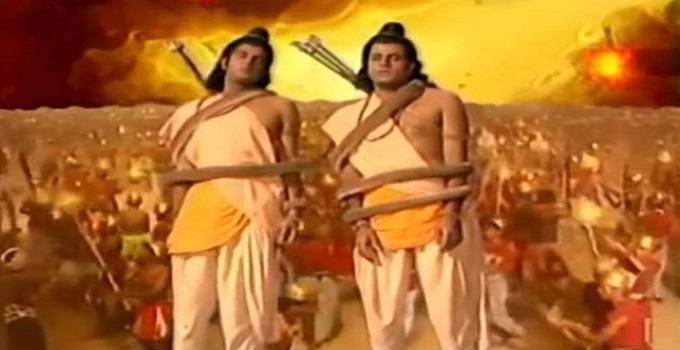 Ramayan gives a beautiful example of the same where Shri Ram and Lakshman being Gods incarnate themselves, yet abide to this important rule, especially in the matter of life and death. During the battle of Lanka, Shri Ram and Lakshman along with the great Vanar army brave heartedly fight many of the sorcery tricks of the demons and make them succumb to their arrows. . Yet, the demons do not lose a chance to fight them with deceit. Resorting to the power of being invisible in the battlefield, he plays an unfair strategy on Shri Ram and Lakshman and bounds them to the deadly Naag Paash. With the strike of the powerful Astra, Shri Ram and Lakshman get bounded with the coils of the venomous snakes and fall unconscious, leaving their entIre army in a shock and grief.

It was not that Shri Ram and Lakshman were powerless against the Naag Paash or were less skilled than Indrajeet that they get bounded to the coils, but with a respect for the Astra. A true warrior always respects the power of a weapon and accepts its decision, and hence Shri Ram and Lakshman get bounded to it. Another reason behind it was that Shri Ram was born as a human to kill Ravan and his mission was to achieve it being a human, but not resorting to divine powers. Lakshman, the incarnation of Sesh Naag follows suit of his master. Both the brothers thus bound themselves to the power of the snakes, who is reality were powerless against them. Had both of them reversed the Astra and let go of their bonds through their divinity, then it would be supersede their human limit and make them divine which again would become a favourable situation for Ravan, as the mighty demon was destined to be slayed only in the hands of a human, but none with divine powers.

For these very reasons of being true warriors and to achieve the mission of kiliing Ravan as humans, both Shri Ram and Lakshman get bounded by the venomous coils of Naagpaash and put their life at stake. But, every problem has a solution and the answer comes in form of the mighty Eagle Garud, who rushes to save his master from the snakes and releases both the brohters from the Naag paash.

Although being the master of the mighty eagle, yet as humble as ever, Shri Ram thanks Garud for his noble help setting the example of humility and gratitude that every person should have towards the help received. It was a matter of life and death for Shri Ram and Lakshman had Garud not come, yet they accepted the challenge and abided to the rules of creation that when it comes to Dharma, the Almighty always favours it than himself.