The eleventh day after the full moon and the new moon is known as Ekadasi. This is a day wherein a fast is observed as it is deeply believed that it keeps our body healthy and sane. Ekadasi has occupied a great importance as a day where one spends his time in the devotion of Bhagwan Vishnu and spends the day in his worship. In fact, Ekadasi is considered one of the very dear and special days to Bhagwan Vishnu. The reason why it is special has an interesting story behind it. 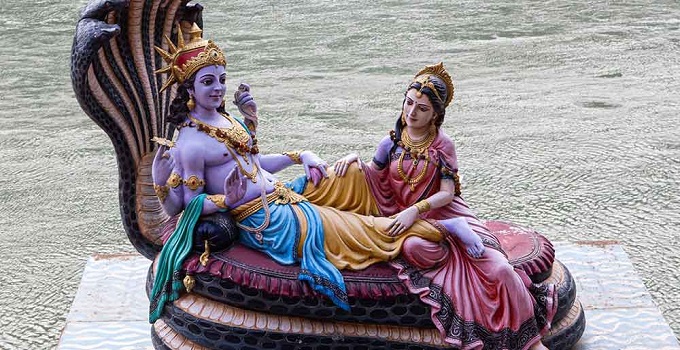 Once a great demon named Muru terrified the three worlds with his tremendous power and harassed the Dharma of the worlds. All the celestials take refuge in Bhagwan Vishnu and ask him to save the worlds from the terror of Mura. Listening to the pleas of the celestials, Bhagwan Vishnu decides to eliminate Mura. Ascending the mighty Garud and adorned with his inexhaustible weaponry, Bhagwan Vishnu starts the fight with Mura.
The battle ensues continuously for a thousand years. Realising that Mura needed other strategies to be slayed, Bhagwan Vishnu acts as if exhausted and retires from the battlefield and hides in a cave near Badarika Ashram in the Himalayas. Mura gets over confident that Bhagwan Vishnu is defeated and chases Bhagwan Vishnu to the cave.
Mura finds the cave where Bhagwan Vishnu was taking rest and enters it. But when he is about to raise his sword on Bhagwan Vishnu, there emits a great radiance from Bhagwan Vishnu’s body and takes form of a divine woman, yielding all the weapons of Bhagwan Vishnu. Mura is obsessed by her beauty and asks her to marry him. The woman smiles and answers that she would marry a person who could defeat her in war. Mura laughs at this and says that it was an easy task to beat a beautiful and delicate woman like her.
The battle starts and Mura is in for a surprise, as the divine woman exhibits great superiority in war and Mura is no match for her skills in war. After a great fight, Mura is killed by the woman and all the worlds celebrate the victory of Dharma over the evil. Hearing the commotion, Bhagwan Vishnu wakes up and comes out of the cave. He finds the divine woman and asks her who she is. The woman smiles and answers that it was the simplicity of Bhagwan Vishnu that he pretended not to recognise his own radiance and power from where she took birth.

Pleased by her answer, Bhagwan Vishnu names her Ekadasi she was born from the eleven senses of Bhagwan Vishnu. He also blesses her with a boon that the people who observed a fast to control their eleven senses on this day would be free from all disease and illness and be bestowed with health and prosperity.

The Ekadasi is a very dear day to Bhagwan Vishnu. To get his choicest blessings, devotees observe a fast by avoiding foods that increase the desires over the senses like rice, wheat, beans and many more. Only fruits or light foods are taken as food, which gives the body a cleansing from the toxins accumulated and also increases the immunity of the body. Ekadasi Vrat is a very important and a steadfast ritual followed in the Sanatana Dharma which bestows the blessings and grace of Bhagwan Vishnu and directs his blessings as energy into the human body.