All devotees are special to the Almighty. Each devotee has a special way to offer his worship to God, If Mata Shabari offered sweet berries to Shri Ram, and there was Hanuman who put his entire life and soul in the service of Shri Ram. If Lakshman served him Shri Ram as his master, then Bharat kept his heart attached to the lotus feet of Shri Ram. To one such special genre belonged, one simple boatman Kewat, who had a small role to play in Shri Ram’s life, but whose devotion was very dear to Shri Ram. 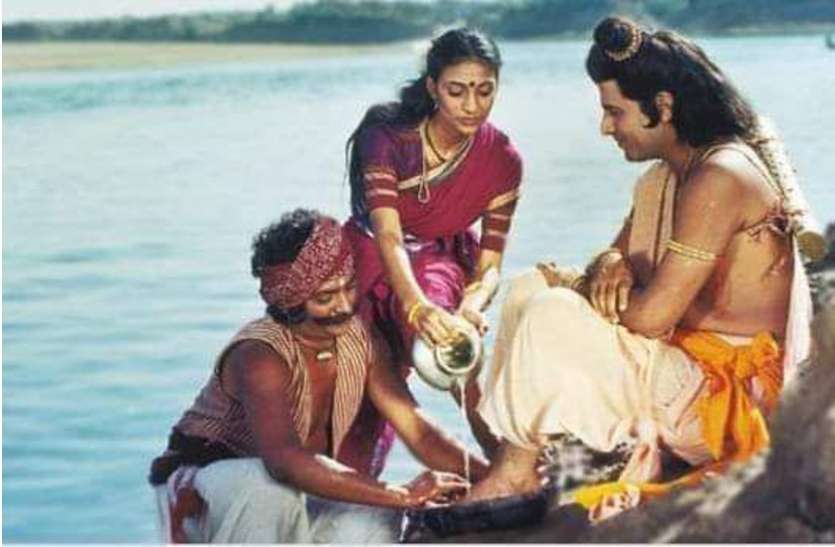 When Shri Ram came to his exile along with Mata Sita and Lakshman, he needed to go across the River Ganga into the interior forests. Shri Ram’s friend Nishadraj arranges for a boat to ferry them across the river whose boatman is Kewat. He was a simple man, not highly educated, nor belonging to a high class of the society. His job was to take people across the River Ganga and all he knew was his devotion for Shri Ram. For Shri Ram, the highs and low s of the society nor rich and poor were never important and he requests Kewat to ferry them across the river. Shri Ram clearly shows that equality of all is what he believed and everybody needs to be respected for his work and profession.

When the Almighty appears in front of the devotee, it is natural that he asks the devotee what he wishes for. But Kewat’s devotion was unique as he wanted to serve Shri Ram instead of asking him anything by washing the lotus feet of Shri Ram. In reality, Kewat had to take many births for his wish of touching Bhagwan Vishnu’s feet to come true. As a boatman, he finally got a chance to serve his swami and he did not want to let it go.

A devotee of Shri Ram is never afraid of him. Kewat innocently poses a worry about his boat turning into a woman, as it is happened with Ahalya. He tells Shri Ram that he wanted to be safe than sorry and wash Shri Ram’s feet before he puts a foot on his boat. Shri Ram was pleased by Kewat’s cleverness behind his innocence and could not deny to Kewat’s request of washing his feet, and bestowed upon Kewat this rare gift only begotten by the luckiest of the devotees. Here, Shri Ram also portrays the example of how the devotee becomes dear to him with love and faith, but not out of compulsion and fear.

God never leaves the devotee empty handed and always thinks of the well-being of his devotees. Shri Ram did not want to leave Kewat empty handed after he had ferried them across the river and offers a ring to him, which the Kewat politely denies. Instead, he falls at the feet of Shri Ram and mentions that Shri Ram is also like a boatman who ferries all life across the river of birth and death and requests him to ferry him across the same when it was Kewat’s turn to come to Shri Ram. For his simple devotion which is unmeasurable in terms of service, Shri Ram relieves the Kewat from the cycle of birth and death after his life of Kewat. If one can understand that devotion from the heart is dearer to the Almighty as Kewat’s for Shri Ram, then such devotion indeed becomes special to Shri Ram forever.