The Ram Setu is the greatest task which Bhagwan Shri Ram as a man has achieved in bridging the waters of the great Sea and making a bridge to reach the inaccessible Lanka. It stands a representation of not only the love of Shri Ram and Mata Sita, but also as a bridge which inspires mankind that the obstacles which come in the way of Dharma can be bridged by determination, courage and belief in one self. 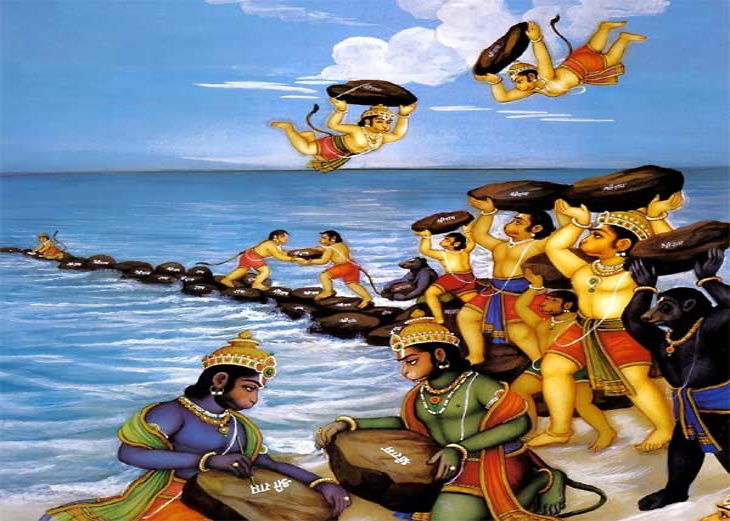 The Ram Setu also teaches that any great task achieved by great personalities is done with an aim to benefit the greater good of the world, instead of an aspiration for fame. The same thing is reflected when Shri Ram himself took a decision to break the mighty Ram Setu into three parts for the welfare of Lanka. This incident is mentioned as a discussion between Shri Ram and Vibhishan in the Padma Puran.

After Shri Ram crowned Vibhishan as the King of Lanka, he starts preparations to go back to Ayodhya along with Mata Sita and Lakshman. After arranging the Puskpak Viman to escort them safely to Ayodhya, Vibhishan comes to Shri Ram humbly with an earnest request regarding the Ram Setu.

Although the Ram Setu was built for the Vanar army to cross Lanka, Vibshian now fears that the Setu might be used by other enemies to cross the ocean and attack Lanka, thus destroying the geographical safety of Lanka, from the enemies. Vibhishan as a righteous king had the great task of re-establishing order and Dharma in the kingdom of Lanka which was totally disturbed by the selfish acts of Ravan. In such time, the first priority would be the safety of the kingdom externally so that Vibhishan could make it strong internally. Hence, Vibhishan requests Bhagwan Ram to break it.

A true warrior does deeds only for the welfare of Dharma, unlike wanting his own fame. Listening to the request of Vibhishan, Shri Ram understands his concern and agrees to Vibhishan’s request. He shoots an arrow named Karmukh onto the bridge which breaks the bridge into three parts, thus making it impregnable for anybody to cross it, thus making Lanka safe again. Then he leaves for Ayodhya with Mata Sita, Lakshman and his entire Vanar warriors along with Vibhishan who come along with him to witness his coronation.

Being rightly the humble and displaying true warrior ship skills for the benefit of Vibhishan and Lanka, Shri Ram does not think twice in breaking the Ram Setu and helping his friend. This yet brings out another beautiful quality in him, wherein he gives first priority to the welfare and safety of people of Lanka, more than his own fame as the creator of the Ram Setu. Shri Ram proves that Dharma is greater than any individual achievements, success and fame and abides to it with sincerity. Shri Ram although breaks one of his finest achievement into three parts, he bridges the world and unites man and demon on the single path of Dharma with total justification to his title as the Yug Purush.