When Shri Ram started for his exile to keep up his father’s word, it was a journey which he started to reach his devotees and walk miles along to bless them. As much as he had enthralled his devotes and dear ones during his exile time, so much does he give importance to his return journey from Lanka to Ayodhya. From the Treta Yug, these places have become sacred centres and have beautiful memories of Shri Ram and Mata Sita till date. 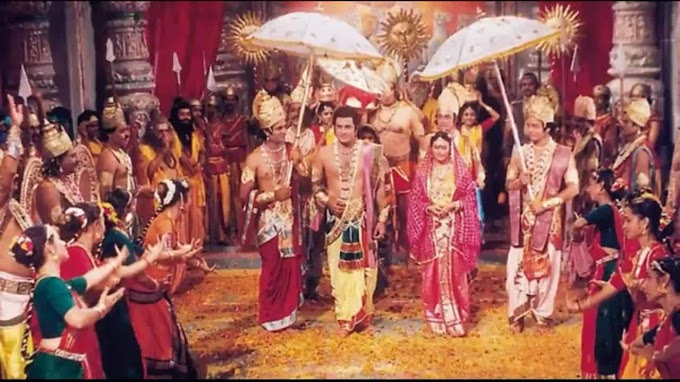 Shri Ram had great respect for Rishi Agastya and it was a special bond that they both shared. Hence, Shri Ram halted at Gandhamadhan Mountain on Rishi Agastya’s advice to absolve his sin of Brahmahatya because of slaying Ravan. Shri Ram worshipped Bhagwan Shiv here when the Shivling was prepared by Mata Sia. Even today, this temple has inscriptions mentioning the same ans is condidered a sacred pilgrimage spot.

Kishkinda – Hampi
Shri Ram shows Mata Sita all the places he stopped during his search for her. Mata Sita feels elated when Shri Ram shows her Kishkinda and requests Shri Ram to take along Tara, Ruma and all the royal ladies of Kishkinda back to Ayodhya for his coronation. Shri Ram asks the Pushpak to halt there and they take along all the royal ladies of Kishikinda along with them to Ayodhya.

Kachangiri
When Hanuman shows Shri Ram his birth place, Shri Ram expresses a desire to pay respects to Mata Anjana and stops at Kachangiri where Mata Anjana resided. Shri Ram, Mata Sita, Lakshman along with Hanuman duly accept the hospitality of Mata Anjana and take her blessings before they proceed to Ayodhya.

Panchavati
It is believed that Shri Ram and Mata Sita request to slow down at Panchavati near Rishi Agastya’s ashram and pay their respects to the great sage. However, according to Maharsihi Valmiki, as Shri Ram was worried about Bharat, he only requests the Puskpak to slow down in the air, and the Rishi blesses them from the ashram itself.

Chitrakut
From Panchavati, Shri Ram proceeded directly to Chitrakut. He desired to take the blessings of all the Rishis he served during his stay in Chitrakut. It is said that he rested in Chitrakut for a while before proceeding to Ayodhya. The trees under which Shri Ram rested along with Mata Sita are worshipped even date as their remembrances and the divine aura which they created by their stay.

Prayag – Rishi Bhardwaj Ashram
Just as Shri Ram, Mata Sita and Lakshman sought the blessings of Rishi Bhardwaj before they started their exile, they again visit the pious sage on the successful completion of their exile. Shri Ram sends Hanuman from this place to Nandigram to inform Bharat about his return. Shri Ram spends some time with Rishi Bhardwaj and also offers prayers at holy Prayagraj.

Sringaverpur
After taking the blessings of Rishi Bhardwaj, Shri Ram proceeds to fulfil the promise given to his childhood friend Nishad Raj Guh and visits his at his place Sringaverpur. Mata Sita offers her prayers to River Ganga at the pious place and seeks her blessings. From there, all the retinue moves and reaches Nandigram and are welcomed heartily by Bharat.

The journey of Shri Ram leaves an impression of devotion and happiness in each and every footstep of his , and hence our land is filled with endless divinity of Shri Ram and faith continues to believe to walk in his footsteps.