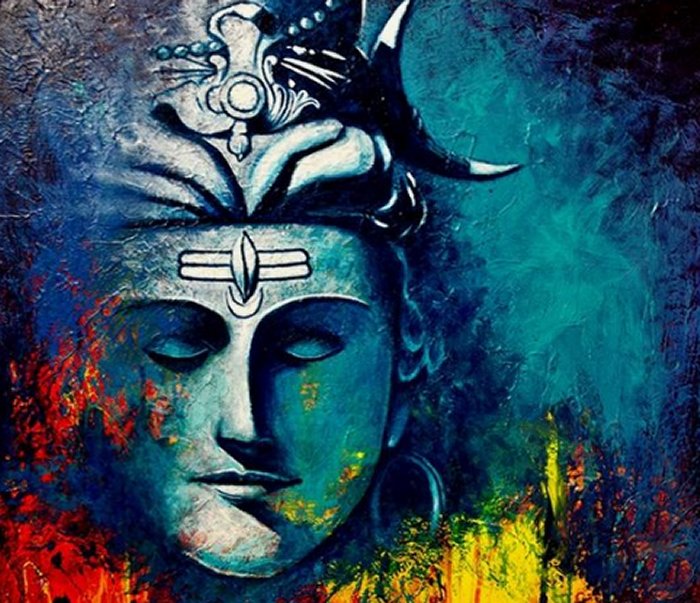 Bhgawan Shiv is called as the Trilochan, or the three eyed one. The third eye symbolises energy through which the universe retains itself. Bhagwan Shiv has used his third eye in times when needed to destroy arrogance and desire over unwanted things. Bhagwan Shiv was filled with remorse when his consort Sati engulfed herself in fire, when she was humiliated by her father, Daksh Prajapati. With rejection on the world, he goes to a lonely place in the Himalayas and starts meditation, keeping himself away from all the creation. Sati was reborn as Bhagavathi Parvathi and it was an uphill task for the Devas to reunite her again with Bhagwan Shiv. Hence, they took the help of Manmadha to strike love in Bhagwan Shiv for Parvathi. Manmadha, the love god goes and strikes his arrows on Bhagwan Shiv.

Disturbed by this, Bhagwan Shiv opened his third eye and opens his third eye and reduces Manmadha, to ashes. Manmadha is reduced to ashes because of his imprudent nature of trying to put Bhagwan Shiv himself under his control. By burning down Manmatha to ashes, Bhagwan Shiv clearly symbolises the power of the mind to reject materialistic desires like love, wealth and riches by which one gets attracted very easily.

Bhagwathi Parvathi realises this aspect of Bhagwan Shiv and then observes severe penance for Bhagwan Shiv. The compassionate Bhagwan Shiv realises her pure love for him and understands her steadfast devotion towards him and becomes her husband. Bhagwan Shiv proves that he surrenders for pure devotion and love, and that is the only way to get his divine grace.

the other two eyes cannot.