The churning of the milky ocean has significance not only for the Amrit (The nectar of immortality), but also for the birth of various celestial and divine beings which are unique and special in their kind. However, it was not an easy task and it required the efforts and contribution of many hands. The Samudra Manthan symbolises that to obtain anything valuable, it requires a lot of hard work, physical effort combined with wisdom.

As a result of Rishi Durvasa’s curse, the Devas had lost their divinity and power. They sought help from Bhagwan Vishnu who advised them to churn the Milky Ocean and obtain Amrit to be immortal and become free from their curse. He asked them to take help of the demons in this process, but promised them that it would not fall into their evil hands, and be available only to the Devas.

The Devas as panned made an agreement to partake the Amrit with the demons and made them agree for the task. They started churning the Milky Ocean with the help of Manthara Mountain and Vasuki, the king of serpents. But when they were unable to withhold the weight of the mountain, Bhagwan Vishnu came to their aid and bore the great mountain on his back incarnating in the Kurma Avatar, the Tortoise.

The churning went on for a long time and first the most poisonous venom Halahal, emerged and all the three worlds began to be suffocated and perish by to its toxic fumes. Bhagwan Shiv came as the saviour and he consumed the poison and held it in its throat, thus gaining the name Neelkanth. The Halahal is a symbol of pollution and one needs to be cautious of such toxic fumes which disturb the life and creation and stop its spread like Bhagwan Shiv did.
Then emerged the Kamadhenu, the celestial cow which gives what one desires. It is a symbol of the unlimited wishes of humans, and it teaches us that though we wish, we need to ask only what is needed. Then the white elephant Iravat emerged, which was the Mount of Devraj Indr signifying majestic and royalty. The white horse Ucchaishrav was known for its swift speed and ability and was taken by the King of the demons, Bali Chakravarthy.

The Divine tree of Parijatha then emerged from the Ocean, which also granted wishes asked for. This was bought to the Bhulok by Bhagwan Krishna and ever since this tree has been worshipped by humans for its divine origins. The dancing celestials Apsaras emerged who were the epitome of beauty combined with talent of arts and wisdom.

Bhagawathi Lakshmi then emerged from the Ocean, as the Goddess of Wealth. All were awestruck with her dazzling beauty and radiance. Bhagwathi Lakshmi with a garland in her hand chose Bhagwan Vishnu as her husband and adorned his heart, thus being called as Vishnu Priya. The Moon God, Chandr then emerged, giving light and coolness to the worlds during the nights. 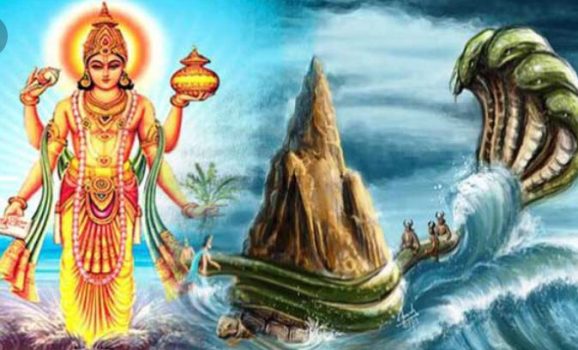 Finally the medicinal God and incarnation of Bhagwan Vishnu emerged as Dhanvatari with the Amrit Kalash in his hands. With the help of Bhagwan Vishnu, the Devas were able to take it, and thus gained back their divinity along with immortality and overpowered the demons. Dhanvantari is worshipped as the God of Medicine who frees us from illness. The divine beings emerged from the Samudra Manthan are considered the most auspicious and worshipped for their divine qualities with great reverence.