Our Sanatana Dharma is more than a religious belief. It is a way of embracing, respecting life and creation and acknowledging its presence always in our life. Not only the celestials, demigods, and others, but even plants, animals and birds are a part of worship as they have a very significant role to play in our life and existence. While praying to the creation, the sacred Gau is regarded as our mother and hence our first worship is always to the Gau Mata in whom all the celestials and gods are omnipresent. 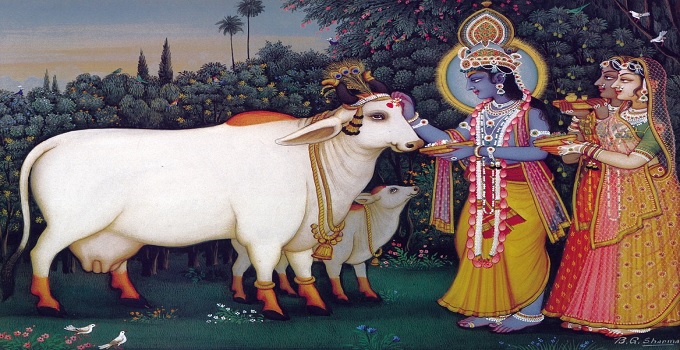 Giver of food and energy – The Gau Mata answers the hunger of mankind as how a mother understands the hunger of her child and provides the entire mankind with the richest source of energy which is its milk. The cow’s milk is considered very energetic and an immunity booster for health. Hence, breeding cattle and taking care of it is one of the most important duties of the Sanatana Dharma.

A replica of pure heart – Bhagwan Shri Krishna grew up as a cowherd among the cows and paid his respects to it by serving it in Vrindavan. While he played the mesmerising flute, the cows out of pure love for Shri Krishna filled all the pots rich with milk bounties. There were no expectations in return, but what Gau Mata needed was a rub of affection and love from its cowherds and nothing else. This is nothing but a pure representation of pure love.

For every person who is a follower of our Sanatana Dharma, the Gau Mata is as equal to that of a mother and it is the beauty of our Dharma that every Hindu honours this status. The worship of our Gau Mata hence gives the benefits of health, happiness, wealth, prosperity and all the more closer to the Almighty, as the Gau Mata is one of the divinities very dear to the Supreme Being himself.