Shri Hanuman, the cosmic form of energy, strength, intellect and devotion is always seen adorned with sindoor all his body. It is an ancient practice of the devotees who worship Hanuman to seek his blessings by applying sindoor (bright red vermillion colour). But, behind this sindoori colour is a beautiful story which depicts the devotion of Hanuman for Shri Ram. 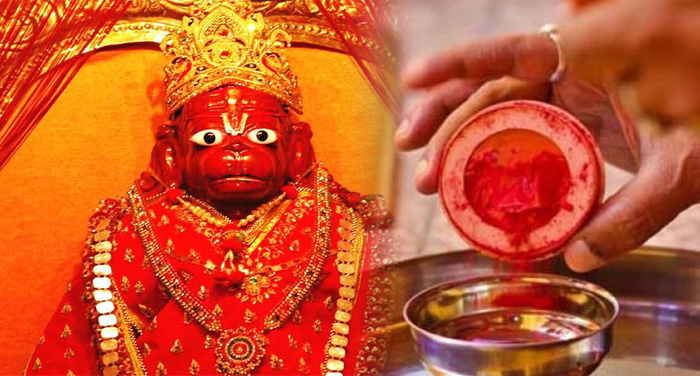 After the great battle of Lanka, Shri Ram came to Ayodhya along with Mata Sita and Lakshman and was received with great happiness by his mothers, brothers and people of Ayodhya. Shri Ram was crowned as the king of Ayodhya and all the three worlds rejoiced with joy. Sugriv, Vibhishan and all other friends of Shri Ram stayed at Ayodhya for some time enjoying the festivities and later went back to their respective kingdoms. But, Hanuman who could not bear the separation from his swami even for a minute stayed back at Ayodhya with Shri Ram and Mata Sita.

In Ayodhya, along with Lakshman, Bharat and Shatrughan, Hanuman devoted himself into the service of Shri Ram and spent all day looking after his needs. There was never a minute that he left his side in the whole day. Mata Sita rejoiced with Hanuman’s service and looked after him as her son. Thus Hanuman kept the entire royal palace immensely happy with his unconditional service and devotion towards Shri Ram and Mata Sita.

Hanuman as a son was quite free to come and go in the palace of Shri Ram and Mata Sita. One day, as part of his daily routine. Hanuman came to the chamber of Shri Ram and Mata Sita to start his day by taking their blessings. When he enters the chamber, he saw Mata Sita applying a dot of sindoor in her forehead (a ritual followed by married woman). Hanuman wonders as to why does she do that and asks her the reason for applying sindoor on her forehead.

Mata Sita smiles and says to Hanuman that she does that for her husband to have a long life with health and prosperity. Hanuman falls in deep thought with this. Suddenly an idea strikes him and he leaves the chamber without saying a word to anybody. As usual when Shri Ram is ready to go to the court he finds Hanuman missing. He is surprised and enquires as to where did Hanuman go, as there is never a day without Hnauman beside Shri Ram. All start searching in the whole palace, but he is nowehere to be found.

After sometime, Hanuman comes to Shri Ram for his daily service, but with sindoor all over his body. Shri Ram is surprised to see that Hanuman in this strange way and asks him the reason for the same. Hanuman mentions that if a tiny dot of sindoor on Mata Sita’s forehead could give long life to Shri Ram, then how much a whole body dipped in could sindoor would do good to Shri Ram. For this reason, he has applied sindoor all over his body.

Shri Ram is mighty pleased with his dear devotee’s ardent love and affection for him. With eyes filled with happiness, Shri Ram blesses Hanuman and grants him a boon that whoever would worship Hanuman with sindoor would be blessed by Shri Ram’s eternal devotion and favour. Since then, it has been a practise to worship Shri Hanuman with sindoor and seeking the benevolence of both the swami and his devotee.