Nandi is the guardian and the gate keeper of Kailash Parvat, the abode of Bhagwan Shiv. Nandi also is the mount of Bhagwan Shiv. Nandi signifies strength and patience. In Sanskrit, Nandi means happy and satisfies, and Nandi is true to his name, has the greatest happiness and satisfaction watching over his master and nothing else.
Nandi was the son of Rishi Shilada. The noble sage observed penance for a long time for Bhagwan Shiv for a son. Bhagwan Shiv appeared in front of him and granted him the same. Nandi was born to Rishi Shilada and grew on to be a very obedient child. Nandi went on to master all the Vedas and the scriptures and grew to be an ardent devotee of Bhagwan Shiv too. 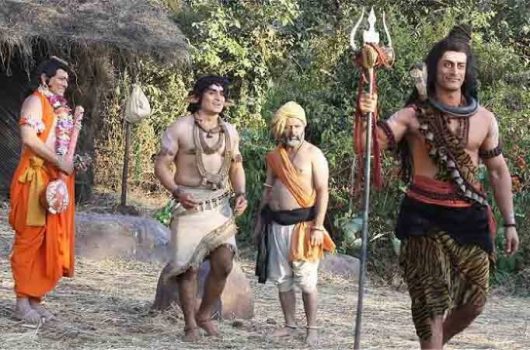 Once, a group of Rishis came to meet Rishi Shilada. They were welcomed by the Rishi and Nandi and offered warm hospitality. The Rishis were delighted by the services of Nandi. However, when Nandi sought their blessings, they did not offer him any. When Rishi Shilada asked them the reason for their behaviour, they said that Nandi had a life only till eight years and hence they couldn’t bless him.

Rishi Shilada was overcome with grief hearing to their words. But Nandi did not lose heart. He went to the banks of Narmada River and starts observing penance on Bhagwan Shiv. The devotion and fervour of Nandi pleased Bhagwan Shiv so much that he appears in front of the little boy and asks Nandi what he desired. Nandi was so delighted to see the cosmic and beautiful form of Bhagwan Shiv that he says he has no wish, but to only remain watching him always. Pleased by his words, Bhagwan Shiv grants him a boon that Nandi would become his vehicle in the form of bull, and guard his entrance, thus always watching him.

A bull symbolises might and power. It bears and balances heavy weights with patience. Being white in colour, Nandi signifies purity too. Thus, Nandi is the personification of the patience a devotee has in serving Bhagwan Shiv with pure and total faith. With the boon of Bhagwan Shiv, Nandi always guards the gates of Kailash. Hence, even today, we see the image of Nandi at the entrances of Bhagwan Shiv’s Ji’s temples. His seating position gazing over Bhagwan Shiv also symbolises an important fact that all thoughts should be focussed on the Almighty, avoiding any kind of disturbances and attractions of the materialistic world.

Nandi is the destroyer of arrogance too. He was the one who destined Ravan’s end by monkeys. Ravan once comes visiting Bhagwan Shiv to Kailash, but is stopped in the entrance by Nandi. Ravan mocks Nandi as a monkey faced one and taunts him to be an inferior animal. Enraged by the arrogance of Ravan, Nandi curses Ravan that the monkeys would play a significant role in destroying Ravan and his clan. Thus Ravan meets his end through the monkey army of Shri Ram.

Nandi is a powerful warrior too, and aids Bhagwan Shiv in many battles over demons through his able riding skills. In our Indian iconography, he is depicted as a warrior too with an axe, mace and an Abhaymudra granting protection to devotees seeking refuge of Bhagwan Shiv. Nandi is more than a vehicle, he is a representation of the soul dedicated to the Bhagwan Shiv and guides mankind as a teacher to reach the feet of Bhagwan Shiv.