Ravan was a powerful warrior demon who won all over the three worlds with his great strength and might. It was not an easy task for him to win such great power and strength and he indeed went through a lot of austerities to get the same. It was many of the great boons given by him by Brahma Ji and Bhagwan Shiv that he went on to become one of the mightiest demon in the three worlds and one such boon was the very reason for his eminence to be equal to almost that of being an immortal one. 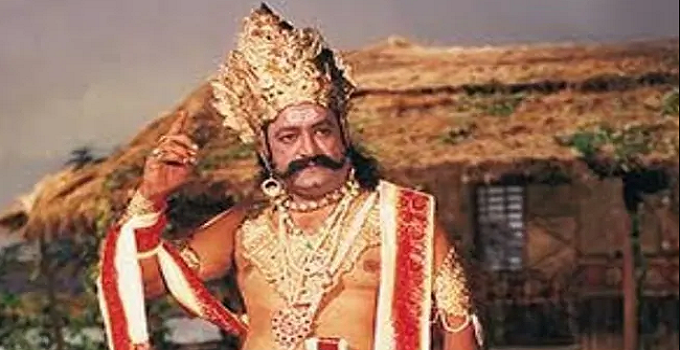 With a great desire to conquer the three worlds Ravan observes penance in order to please Brahma Ji with his devotion and determination. Following the severe austerities, Ravan chops of his head as a part of sacrifice and appease to Brahma Ji. As he was a demon and was well versed with various sorcery tricks, each time he chopped his head, a new head aroused in its place which endured him to continue penance. This happened for nine times, and each time he was able to continue his penance even more severely. However, after the ninth time, Ravan knew that this would be the last chance as his decapitated head would not arouse again.

Yet, with a determination and a belief that it was useless to live when he could not appease Brahma Ji with this devotion, Ravan does not hesitate to cut off his head even for the tenth time, and sacrifices it as an offering to Brahma Ji. With this final offering, Brahma Ji gets pleased and blesses him back with life bestowing his decapitated head. Pleased with Ravan’s devotion, Brahma Ji asks him what he desired, and Ravan asked for the boon of immortality. But Brahma Ji says it is not possible as every life that was born had to perish sometime. Instead Brahma Ji gives him the celestial Amrit which was stored under his navel. Brahma Ji then mentions that Ravan would be invincible till the celestial pot of Amrit was safe under his navel and none could kill him thus making him equal to that of being immortal, till destiny decided a different course.

Ravan in spite of being the possessor of such great boons uses them to conquer and terrify the world and hinder Dharma. His pride and arrogance that he was invincible because of Brahma Ji‘s boon makes him vulnerable to many mistakes, of which abducting Mata Sita was the greatest. Ravan’s foolishness leads to a war wherein Shri Ram comes along with the Vanar army and attacks Lanka. Ravan’s pride grows so high that Vibhishan leaves his side and joins Shri Ram in the mission to uphold Dharma.

In the final battle of Shri Ram with Ravan that ensued, Shri Ram tries all ways to decapitate the heads of Ravan, but a new head arouses as soon he removes one, because of the Amrit under his navel putting Shri Ram into a fix as to how could he defeat Ravan. It is at that time that Visbhishan spills out the secret and Shri Ram first destroys the pot of Amrit under Ravan’s navel making him weak and with the next arrow slays the mighty demon. Thus, the boon which was acquired by Ravan after a great deal of austerities succumbs to the powerful arrow of Shri Ram, reminding a lesson that any boon which is used for selfish means perishes in front of the ultimate frontier of Dharma.