On the banks of River Swarnamukhi, beside a small hill, in the Chittoor district of Andhra Pradesh stands a great temple of Bhagwan Shiv wherein he appears as the Vayu Lingam,(air) out of the five Panchabhuta Lingas. The wind God Vayu, once did great penance here to appease Bhagwan Shiv. Pleased with the austerities, Bhagwan Shiv appeared in front of him and asked him a boon. Vayudev replied that he wanted Bhagwan Shiv to manifest in him as air and be present everywhere along with him. Bhagwan Shiv then promises Vayu that he would manifest as the Vayu Linga thus, denoting that without air, nothing exists.

This temple is also for the eternal devotion of three animals who dedicated their life to the worship of Bhagwan Shiv. There was once a spider, serpent and an Elephant who came to worship Bhagwan Shiv in the temple daily. However, each of them wanted to be the favourite of Bhagwan Shiv and hence used to obstruct the other’s worship. One day the spider to obstruct the elephant stung its eye and the snake slipped into the trunk of the elephant. Hurt by their stings, the elephant crashed against the wall, and thus all the three animals died. Bhagwan Shiv then appeared in front of their souls and said that all three of them were equal and dear to him. For their devotion to be remembered eternally, he granted the boon that the temple since then would be called on their names Sri – Spider, Kala – Snake and Hasti – Elephant and the temple was named as Srikalahastishwar temple. Bhagwathi Parvathi is worshipped here as Gnana Prasunambika (Gnan- knowledge), the giver of knowledge.

Bhagwan Shiv also granted liberation to Kanappa, a tribal devotee in this temple. Kanappa is considered to be the re birth of Arjun, the Pandav. Kanappa was a great devotee of Bhagwan Shiv and he bought flowers, meat and water from the forest to his swami. But the temple priests did not allow him as he was of an inferior caste and he offered meat as an offering to Bhagwan Shiv. Bhagwan Shiv decides to teach them a lesson and one day, blood starts coming out of one of the linga’s eye. All priests in the temple panic and not understand what to do. But Kanappa removes one of his eye with an arrow and places it on the eye. But, immediately the other one starts bleeding. Then Kanappa decides to take his other eye out, but does not understand how to place it on the linga, as he would become blind. He thinks of an idea and puts his foot on the Linga to recognise the place and pierces his eye, when Bhagwan Shiv appears in front of him and blesses him back with eyesight. Then he tells the priests that true devotion has no barriers and gives salvation to Kanappa. In Telugu, “Kanu” means eye and “Appa” means man, and as he gave his eyes to Bhagwan Shiv, he was named Kanappa. There is a temple dedicated to this tribal devotee at the top of the hill beside the river Swarnamukhi. 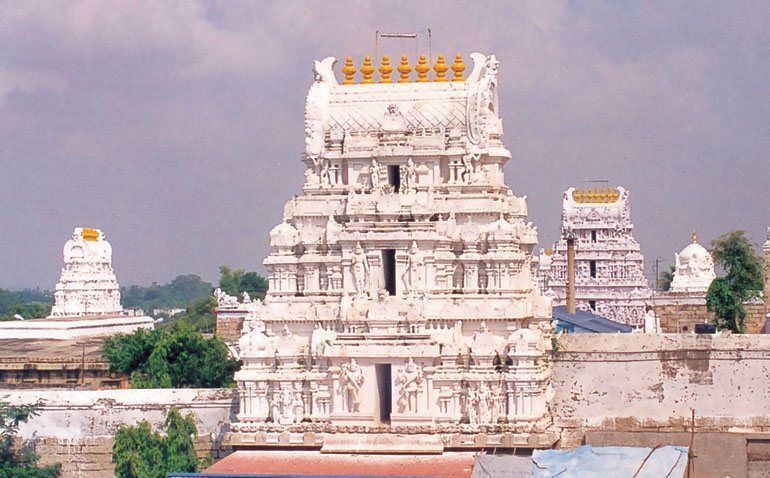 This temple is also famous for liberation from the problems of Rahu and Ketu and many devotees worship Bhagwan Shiv to make them free of these Grah Doshas. The temple received extensive patronage and contributions from the Cholas and the Vijayanagar dynasties, is built with huge complexes and is considered as the Kasi of the South.