Ramayan is a gift to humanity in Seven Kands, in which the first two gives the gifts of family ideals. Dharm stands as the key ideal in each and every Kand and give different virtues which help humans build their identity in each and every stage of life .In short, it represents our great country’s ethical code which is laid on the foundations of Sanatan Dharma. 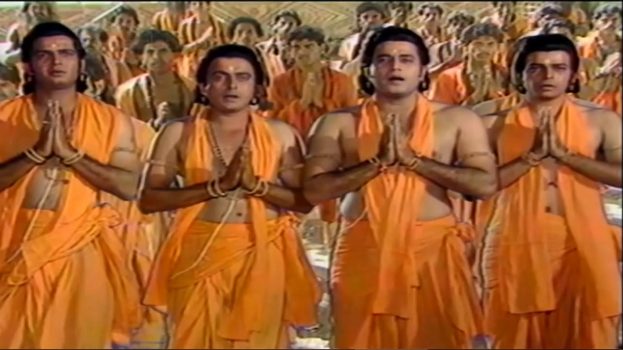 The Bal Kand explains the relation of love between parents and children, which is the first foundation for a human. Maharaj Dasarath with Kaushalya, Kakeyi and Sumitra teach the responsibilities of the parents towards the children. Although the four brothers were brought up with all love and care, they were also taught discipline. The parents taught the brothers to respect all irrespective of high and low of the society. This had a great influence on the brothers and there is never a single incident where they go against their parent’s wishes. Be it leaving to the Gurukul Ashram to pursue their studies, be it Shri Ram and Lakshman going with Rishi Vishwamitr on their father’s command or be it again they both leaving for exile for fulfilling the parents command, the belief of respecting elders always stood first in their life. The four brothers were always dutiful to their parents who gave them birth, the greatest gift of life.

In the Gurukul Ashram, Rishi Vasisht teaches them the greatest virtue of humility. He teaches them that however knowledgeable a person might be, one needs to be is humble for the knowledge to shine. These words have such a great impact on Shri Ram that he makes it his greatest virtue and it in turn makes him dear to one and all. Rishi Vasisht also teaches them that one should be prepared for any kind of circumstances destiny brings them. He makes them learn all hardships a common man faces, which later helps Shri Ram and Lakshman to face the hardships of the jungle. It helps Bharat who deliberately sacrifices a comfort life along with his brothers. Shatrughan’s silent sacrifice of taking up the responsibilities is again a beautiful lesson of how the youngsters in the family should be loyal to the elders.

The Ayodhya Kand teaches loyalty in different ways. It is abundant with values of duty, dharma and sacrifice which are the most necessary ideals for humans to practise. Maharaj Dasarath, in spite of knowing that it would cost his life, does not go back on his promises to Kaikeyi. Equally honest is Shri Ram who leaves the huge empire and goes to the forest. Devi SIta teaches the most important aspect of faith wherein although having a choice to go to her parents, she instead opts to go with Shri Ram. Lakshaman having all the strength to fight for his brother is yet, obedient to Shri Ram and limits himself to following Shri Ram’s command and sacrifices himself for service. Urmila, as the devoted wife to Lakshman also sacrifices herself to duty towards the elders and bears the pangs of separation with Lakhsman with a brave heart.

While the Bal kand teaches us the values of love, respect, discipline and affection towards family and elders, the Ayodhya Kand teaches self-sacrifice and loyalty. In simple, they depict what is written in our Vedas about family. Hence, Even though happened sometime in the long distant past, it still is fresh even today and the values are utmost needed in today’s imperfect world.