There are different set of procedures we follow when we visit a temple, which includes the way of worship, the Pradakshina, the Aarti, and then Naivedy or the Prasad all which form the important customs of worshipping God. These customs are primarily are for mankind to learn and observe certain code of conduct which makes us pure in mind and body and thus can pray God with sincere faith. 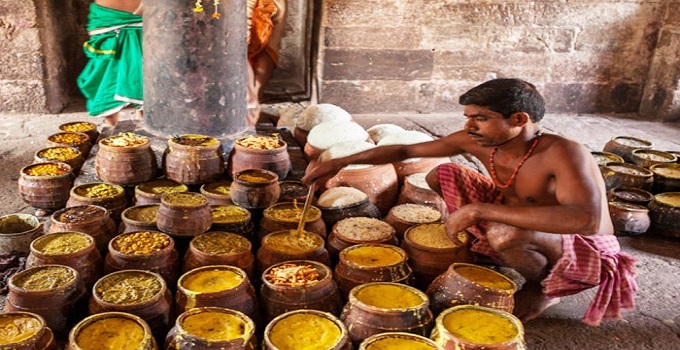 Each and every ritual has significance and has a positive effect on us for performing it as an offering to God. The Naivedy and the Prasad are important as they are one way of pleasing God with delicacies of food. While the Prasad consists of fruits, sweets offered to god and later distributed among the devotees, the Naivedy is the ritual where the food is kept in front of the main deity in the temple and offered with mantras and prayers.

In a land of varied cultures, this offering of Prasad is done in a variety of dishes and flavours special to temples and these bring out not only our culture connection, but also the flavour of each region in India. Seasonal produces, local spices, rice, dal, jaggery are used in these Prasad, which are not only tasty, but also very beneficial to health.

Although all temples have their own offerings of food, there are few temples which have become quite famous for their Prasad. The great Annapurna Temple at Varanasi is also the most coveted place in food offerings. Bhagawathi Paravathi is worshipped as the Mata Annapurna, the goddess of nourishment and hence the Prasad here is very special. Steamed rice is served in this temple to help us understand the importance of rice which is considered as a sign of fulfilment.

The Jaganath temple at Puri offers Anna Brahma Mahaprasad which is a total of fifty six items with brinjal, pumpkin, lentils and sweet cakes and the seasonal produces of the year cooked in an earthen pot. The favourite Modak sweets are offered to the presiding deity Ganesh Bhagwan in the Siddhi Vinayak temple at Mumbai. The Vaishno Devi offers delicacies of Rajma Chawal, Kadi, Chana and Halwa which help the devotees build the immunity against the mountain cold weather. The Sabari Mala Ayyappa temple offers Appam made of rice and coconut milk.

Bhagwan Vishnu across India is offered a variety of Prasad which are distributed to the devotees. One such temple is Tirumala temple, where the laddoo is world famous as the Tirupati Laddoo. There is an unending supply of these laddoos round the clock and all devotees enrich themselves with the taste of the pure ghee Laddoo. The Srirangam Temple at Srirangam offers Dosa as the Prasadam, while Idli is served in the Kanchipuram temple at Kanchi. These dishes not only are the favourite of the locals, but also bring out the regional flavour of cuisine which is deeply connected to our culture. 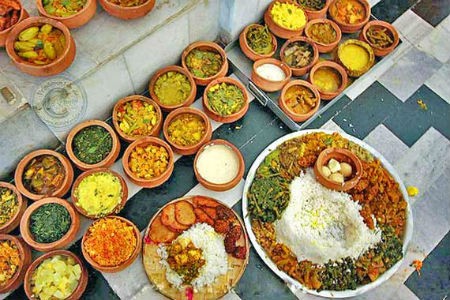 The Eastern flavour comes out in the Krishna temple in Imphal, Manipur where butter, cream curd and milk are offered which is dear to Bhagwan Krishna. The Raj Ram temple at Madhya Pradesh besides milk sweets also offers the beetel leaf Paan as a custom offering.

The Prasad distributed among the devotees is believed to bring good health and luck. The temple offerings teach us to respect the food we get from nature and use it in ways beneficial to one’s health and the society and respect it as a gift of God to mankind.