Any obstacle of life is not as big as it looks. It is the fear of facing the obstacle which makes it look big. No obstacle is greater than man’s determination which helps resolve even the impossible tasks of life. The beautiful example of such determination is given by Shri Ram when he tackles the problematic Ocean to reach Mata Sita. 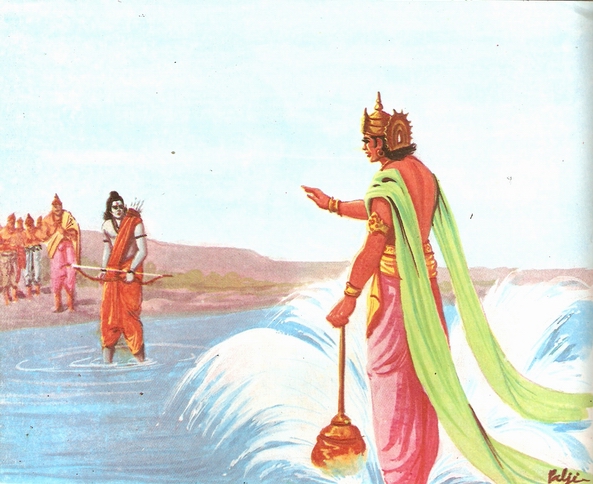 Shri Ram was the powerful warrior who could dry up the ocean in a trifle, but being the wise and the noble person he respects the laws of nature and decides to request the Ocean to give him way across to reach Lanka. In reality, the Ocean was created by the ancestors of Shri Ram and he had all the right to demand it to accept his command. But a courageous person does not show authority and believes in his own strength and confidence to tackle a task. Shri Ram believes that his worship would please the Ocean and help would be offered, but after three days when the Ocean does not listen to his request, the compassionate Shri Ram is angry on the arrogance of the mighty waters.

A determined person fights out his way in all ways possible. The nature of a determined person is that when he doesn’t find a door to go ahead, he builds one. When Shri Ram does not get a sign of help from the mighty Ocean, he is angered and decides to dry it up. Being patient and humble calm is never a sign of weakness, but strong virtues. However, when these virtues are put to test, then the virtuous one shows his strength too. The world fears seeing the anger of Shri Ram through which he would dry up the waters and make it a desert, thus paving way for his army to cross the Ocean.

When Shri Ram sets his arrow on the Ocean, the solution appears directly in front of him in the form of Samudradev and surrenders to Shri Ram’s determination. Samudradev humbly says to Shri Ram that his silence was not out of arrogance, but because of his nature to be fathomless and mentions that it would be against the rules of creation if he would become shallow and give way to cross his waters. But admiring Shri Ram’s determination, he gives the idea to build a bridge upon his waters with the help of the mighty Nal. The Ocean king promises Shri Ram that he would safeguard the bridge and keep them away from all dangers while Shri Ram and his army crossed his waters. Thus the Ram Setu built is a representation of Shri Ram’s determination and an inspiring symbol for all who dare to cross the turbulent waters of life.

Every problem has a solution, the only thing required is the determination to solve it. The mighty Ocean resembles the Ocean of life on which every human has to travel. It depends on the thinking whether one would swim across it, sink in it or build a bridge and cross over. A wise and a determined person would chose to build a bridge on the ocean of life which not only crosses him through, but also brings him fame and success. Above all, the solution found through determination

is like the bridge which not only aids oneself, but also benefits others who follow the path and makes life meaningful of being helpful to others.