The gigantic demon Kumbhakarn in his talks with Ravan gives insights into many wise sayings which actually show his inner personality as a virtuous warrior. These are important to understand that one needs to choose his friends or counsel in a very careful manner as success or downfall, both depend on their advice. The conversation of Kumbhakarn with Ravan is an important one in Ramayan as it throws light on the choices we make while selecting friends or counsel.

Feeling sad for the state of affairs in Lanka, Kumbhakarn further tells Ravan that it is the foremost duty of the king to act in the welfare of the people and his counsellors should engage him to take the right action at the right time which would never create any misfortune on the kingdom. Kumbhakarn ridicules Ravan that the counsellors of Ravan were not truthful and wise, but instead were men who told haughty things to Ravan without knowing the consequences of their advice.

Kumbhakarn feels that such counsel who supported him in his wrong deeds should be removed from Ravan’s court as they are Ravan’s true enemies pretending to be friends. Kumbhakarn feels bad that Ravan had disregarded the advice of Vibhishan, his only wise and true well-wisher and instead fell prey to the words of indifferent counsel and friends whose only motive was to be in the good looks of the king. Kumbhakarn says that a king who listens to false advises of his ministers and a king disregards his enemy and does not protect himself nor his people would finally face defeat. Finally Kumbhakarn says that although Ravan did not perform his duty as a king, he would perform his duty towards the king and mentions that he would and face the enemy and kill them all and bring Lanka’s splendour back again. 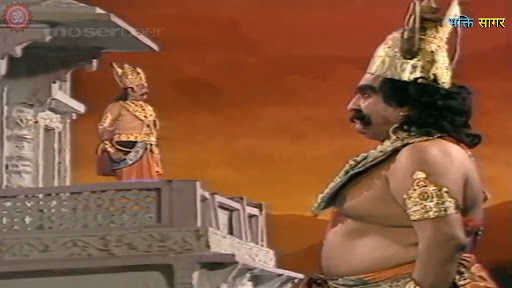 The wise words of Kumbhakarn are indeed thought provoking and to be given attention in many of the situations of our daily life. In the deeper sense, Kumbhakarn mentions all those qualities which are to be practised to be a virtuos person. An egoistic person is always surrounded by people who only pretend false care and give suggestions suitable to their comfort rather than guiding in the right direction. They look for their own benefit out of it for their selfish means. Ego leads to ruin. It never does any good. It is always safe to be away from ego and also people who take advantage of one’s ego and which only leads to downfall never to success. The great warrior Kumbhakarn ,out of brotherly love gets ready to put his life in stake for the cause of Ravan and goes to a war which he would never win.