The stories of true devotion are always a treat to listen. Their deeds of unconditional devotion, fervour and love for the Almighty give an everlasting belief that God asks for nothing, but cares of the pure devotion of the devotee. The ways of devotion are varied, but all reach the heart of the Almighty. One such great devotee who served Bhagwan Krishna with her everlasting music was Mira Bai.

Mira was a 16th century Bhakti poetess born in a Rajput family, in Rajasthan. Right from her childhood, she was unique. Mira’s mother had a temple dedicated to Shri Krishna in the royal premises and that’s where Mira spent her entire childhood. When Mira was five, one day she dressed herself as a bride and asked her Mother that where was her groom. Her mother smiled at the innocence of Mira and answered showing the idol of Shri Krishna in the temple and said that Giradhara Gopala is your bride. Since then, Mira took great fascination to Shri Krishna and spent her entire time with the idol. For little Mira, her days were filled with listening to the stories of Shri Krishna. She bathed the idol, worshipped it, danced and sang for it, and talked to it. She had unending conversations with Shri Krishna’s idol and was lost in the bliss of devotion for her swami.

However, when time came she was married off to Bhojraj, the eldest son of Rana Sanga from Mewar. Mira as a dutiful wife attended to all the duties of her husband and did all her best to keep him happy, but without leaving her devotion for Shri Krishna. However, few jealous counterparts could not bear this and filled her husband’s heart with hate on Mira for her devotion. Overcome with anger, Bhojraj asked Mira to leave the devotion of Shri Krishna, but Mira did not compromise. With anger, she was sent away from her in laws place.

Mira had no place to go. She reached Vrindavan and when she saw the River Yamuna, her heart was filled with ecstasy and she rushed into it to give up her life, but she saw herself being rescued from none other than Shri Krishna. He blessed her that since that day she belonged to no physical bond, but to only his eternal bond of love and devotion. Thus, Mira had reached the pinnacle of her devotion and she began living on the banks of River Yamuna and singing songs and dancing to the ecstasy of devotion on Shri Krishna. 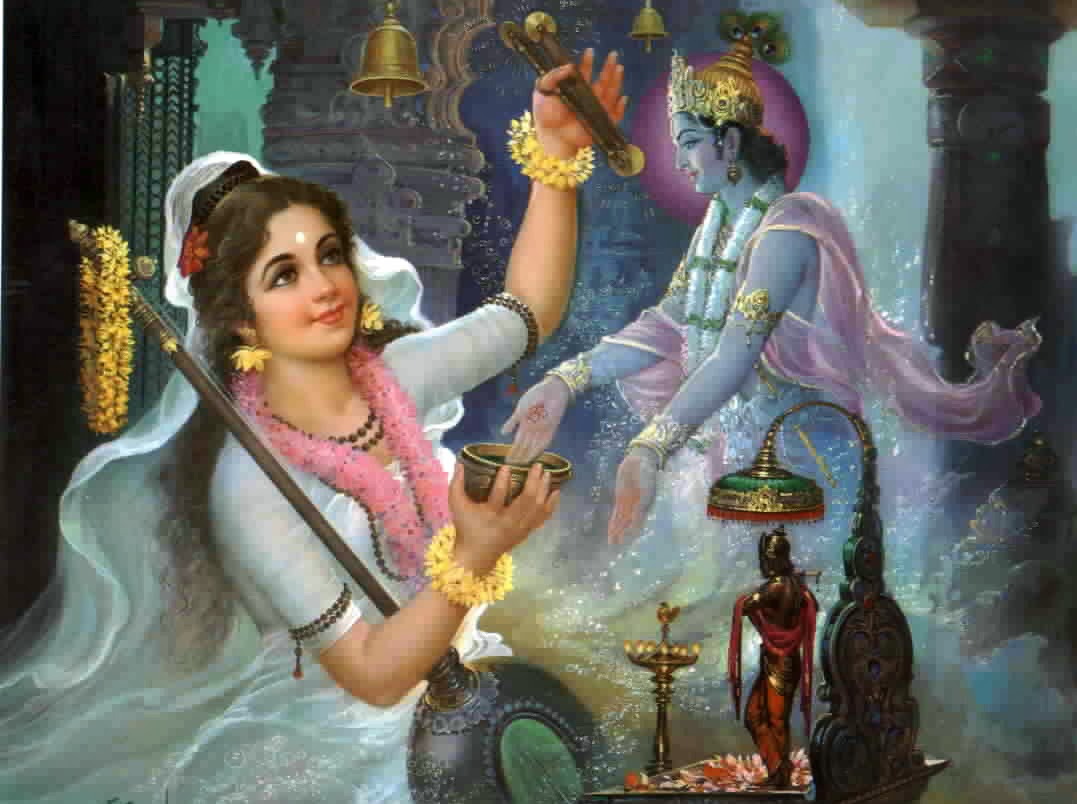 News spread like wild fire and devotees thronged to look at her and listen to her songs. Meanwhile, her husband repented for his actions and asked her to return back where a temple would be dedicated to Shri Krishna for Mira to always be in service of her God. Mira agreed and returned back however to be troubled by her brother-in-law Rana, but none harmed Mira. She was once sent a snake hidden in a basket of flower garlands. But, when Mira opened it, she found an image of her beloved Krishna. Then, Rana sent her a cup of poison saying it is nectar, Mira drank it gladly and no harm came to her. Rana understood her true devotion and asked for her forgiveness. Thus, Mira came over all the persecutions and troubles and finally was with freedom to sing and immerse in the devotion of Shri Krishna for the rest of her life.