The Magh month on arriving, brings along a hoard of festivals giving a positive look and hope of the coming year with celebrations and festivities. Hence, the Maagh month is considered the most auspicious one for celebrations like marriage, home warming and many more. This month is also one of the month which welcomes the Vasant Navratri festival which comes up in the month of Chaitra after Maagh celebrating the new year too. 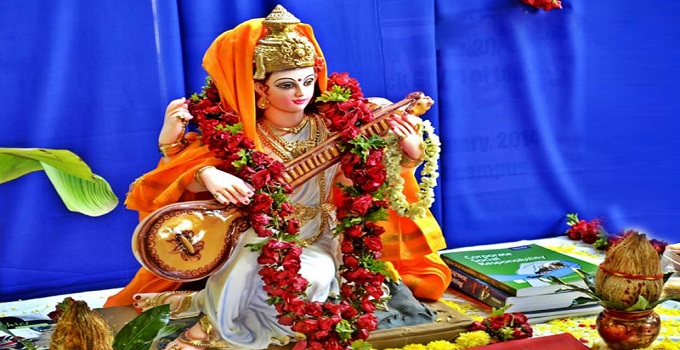 The fifth day in the Shukl paksh of the Maagh is celebrated as the Vasant Panchami festival, as it is considered as the holy day on which Bhagwathi Saraswathi was born. The goddess of learning who blesses man with intellect, art, wisdom, creativity and knowledge was created by Brahma Ji on the fifth day after the Maagh month had started, as hence it is celebrated as the Vasant Panchami. It is called Vasant Panchami as it is believed that the Vasant Ritu starts bringing its colours of joy from this day itself as a preparation to welcome the start of the new cycle of the six seasons.

On the Vasant Panchami, children are introduced into education as it is considered that starting the quest of knowledge on this day will bring fame and success to a student. Bhagwathi Saraswathi is a personification of pure knowledge and learning. The temples of Bhagwathi Saraswathi are especially busy with activities related to the Akshrabhyas ceremony on this day. The Vasant Panchami is also called as the Sri Panchami. Bhagwathi Saraswathi is one of among the three goddesses who together are the embodiment of Mata Durga. Sri means Wealth, and as the real wealth of mankind is knowledge, she is also worshipped as a representation of Bhagwathi Lakshmi, who likes to reside in places of purity of heart and mind which enhance knowledge.

This day is also called as the Madan Panchami. The reason is that Manmadha the god of love, who was burnt to ashes by Bhgawan Shiv was again bought back to life on this very day on the request of Manmadha’s wife Rati. Also, Bhagwan Shiv grants Manmadha the boon that henceforth he could be seen only by Rati and none others and grants him permanent safety. Devotees celebrate this day as Mandanotsav on the occasion of re birth of Manmadha.

Bhagwathi Saraswathi is a symbol of purity and hence is adorned with white garments. However, on Vasant Panchami, the devotees worship her by adorning her in yellow garments considering that she would bring all auspicious moments into their life. On this day, she adorns the yellow garments representing happiness, the four hands represent the four directions, the book in one hand represents knowledge, the Japamala, represents the pursuit of knowledge step by step and the Veena which she adorns on the other two hands is a representation of all the creative arts born from her.

All seekers of knowledge worship her on this auspicious day so that their quest for knowledge goes uninterrupted. In few places, the devotees pray to Bhagwan Vishnu along with Bhagwathi Saraswathi as Bhagwan Vishnu stays in places only where there is knowledge. The worship of Surya Dev is also considered very auspicious on this day. In this year, the Vasant Panchami falls on the Feb 16th of the Maagh Month. The celebration of Vasant Panchami for all students and knowledge seekers brings in success, fame and prosperity through which the glory of our culture and traditions and knowledge shines and spreads all over the world.