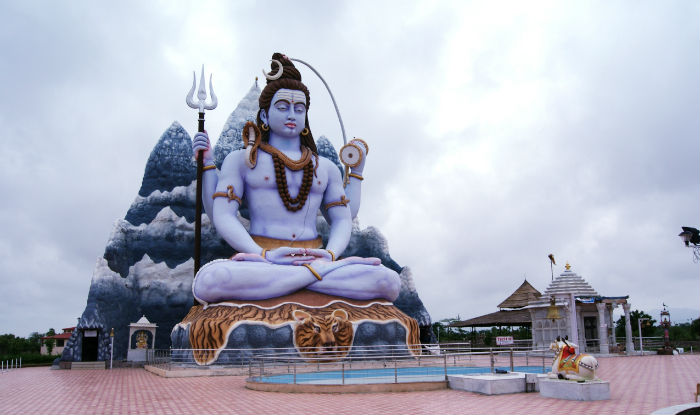 Meanwhile, Bhagwathi Parvathi took birth as the daughter of a chief of fishing village Pravara who was an ardent devotee of Bhagwan Shiv. He named her Parvathi and bought her up with utmost love. Parvathi grew up to be a young beautiful maiden and also an adept fisherwomen trained by her father. Just like her father, Parvathi too became a dutiful devotee of Bhagwan Shiv and worshipped him daily with all fervour and faith. Ready for marriage, Pravara declared that he would marry Parvathi to a skilful fisherman who would continue his legacy.

At Kailash Mountain, the faithful Nandi noticed all the suffering and pain of Bhagwan Shiv in the thoughts of Bhgawathi Parvathi. He could not bear the pain of his master and thought of an idea. Assuming the form of a huge shark, Nandi reached Pravara’s village and entered the sea. He started creating chaos by destroying the boats and nets of the village and terrifying all who tried to do fishing for livelihood in the waters. All were terrified at the menace created by the shark and approached Parvara for help.

Seeing the plight of his people, Pravara declared that he would give Parvathi’s hand in marriage to the one who caught the shark. Parvathi who was watching all these happenings prayed to Bhagwan Shiv to come and rescue her clan and people. The moment Parvathi asked for it, Bhagwan Shiv who was waiting for her call, assumed the form of a handsome fisherman and approached Pravara. Parvathi fell in love in the first sight with the young man and prayed to Bhagwan Shiv to make him successful little knowing that he was Bhgawan Shiv himself.

With his net in hand, the fisherman went into the waters and found the shark and hurled the net. Nandi who was waiting for this very moment came into the net and fulfilled the mission of Bhagwan Shiv. Nandi was more than happy that now Bhagwan Shiv would once again be united with Bhagwathi Parvathi.

Pravara was immensely happy at the valour of the fisherman and gave an even happier Parvathi in marriage to the brave man. The moment they were married, they assumed their real forms of Bhagwan Shiv and Bhagwathi Parvathi. Pravara came to know the entire story and was filled with tears that Bhagwathi Parvathi chose him to be her father and asked the divine couple to bless his entire clan. Doing so, both returned to Kailash once again reunited.