Ravan’s encounters with Bhagwan Vishnu were not just from the time from the incarnation of Shri Ram, but even before. It was not in a single day that the good forces planned for the downfall of Ravan’s pride, but they took every chance to make him understand the great power of the Almighty and given him a warning that pride never won in front of nobility. In this mission, the noble Rakshas Bali Chakravarthy who was an ardent devotee of Bhagwan Vishnu too played his part by bringing down the pride of Ravan and making him understand that even his own clan would not support him if he was against Dharma. 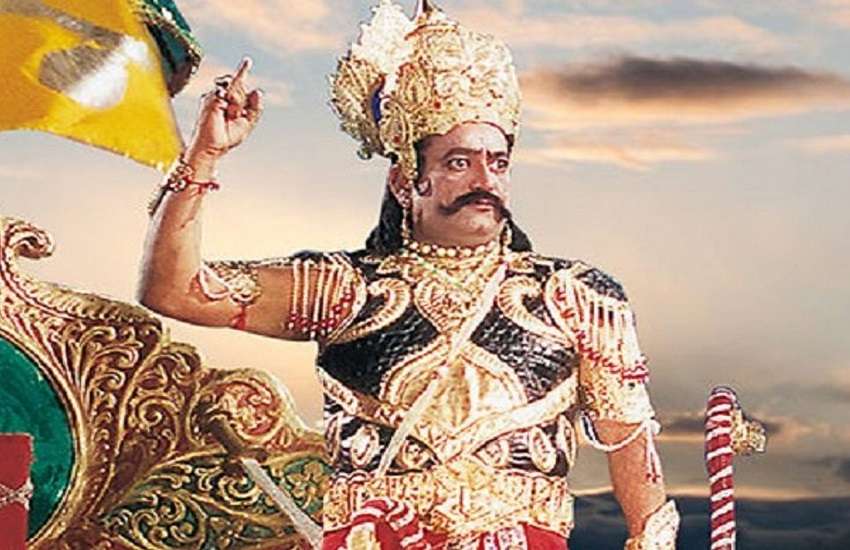 When Ravan reaches the palace of Bali Chakravarthy in the neither world, he finds a huge warrior in the size of a mountain guarding the door. Ravan demands the warrior to move aside and let him in. The warrior calmly asks him the purpose of his visit. When Ravan explains him the reason of his arrival, the door keeper laughs at him and says that Bali Chakravarthy was not held captive as Ravan thought. But Ravan does not agree to this. The door keeper asks Ravan to see for himself and lets him in. o

Ravan comes to Bali Chakravarthy and mentions that he had come to free the king from Bhagwan Vishnu’s captivity as he was the only warrior who was capable of doing so in the three worlds. Bali Chakravarthy smiles and shows Ravan a huge bracelet in the size of a hill and asks him to lift it. Proud of his might, Ravan tries to lift it with all his strength but the bracelet doesn’t budge.

Chakravarthy then says that the door keeper whom Ravan had met before entering his chamber was none other than Bhagwan Vishnu. Hearing to this, Ravan rushes back to the door, but does not find anybody. When he asks Bali Chakravarthy the reason, the noble demons mentions that an egoistic person like him was not worth seeing the divinity of Bhagwan Vishnu. On the other hand, Bali Chakravarthy had sacrificed his life on Earth for the sake of a good cause and hence was guarded by Bhagwan Vishnu as his protector. Thus, Ravan’s pride met defeat by a demon from his own clan and the same disregard for Bhagwan Vishnu later led to his downfall too.