The battle of Shri Ram and Ravan was not a battle of man and demon, but it was a battle for the reason that no life or creation was lesser or greater than any and all had an equal role to play in the survival of Dharma. Shri Ram had a very special bond of affection with his Vanar warriors and motivated them to success with all his affection. The demons of Lanka stood no chance in front of great warriors like Hanuman, Sugriv, Angad and the wise Jambavant. The finale was when Ravan who terrified all the worlds with his power succumbed to the arrows of Shri Ram. The entire worlds rejoiced and celebrated the victory of Shri Ram. 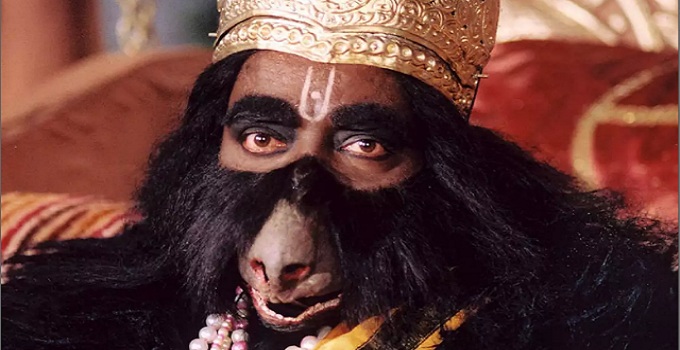 Later, Shri Ram returned to Ayodhya along with his retinue and got crowned as the King of Ayodhya. In the festivity, Shri Ram duly honoured every Vanar warrior who helped him achieve success in his mission. However, when the turn of the wise Jambavant came up, he refused to take the honour and instead comes up with a strange request that instead of all the honours, he wanted to fight Shri Ram.

All are shocked at this strange wish of Jambavant, but Shri Ram smiles and asks him the reason for his strange request. Jambavant with folded hands mentions that he had never seen such a valorous warrior like Shri Ram before and hence wanted a fight with Shri Ram to witness the same valour of Shri Ram once more. Pleased with the straight and open request of Jambavan, Shri Ram mentions that it was his duty to fulfil Jambavant’s request and he would do the same in the future. The festivities end and all the Vanar warriors reach Kishkinda and life continues.

Later Treta Yug ends, and Dwapar Yug comes. Shri Ram is born as Shri Krishna. Being immortal, Jambavant spends his time in the devotion of Shri Ram yearning to see his swami once again. Meanwhile, Shri Krishna in his purpose of upholding Dharma continues to play his divine Lilas and see that Dharma is always protected. In this context, Shri Krishna gets accused of stealing the Syamantak jewel from Satrajit, an ardent devotee of Surya Bhagwan. To prove the accusation false, Shri Krishna sets out in search of the jewel and comes to know that through unexpected events, the jewel has come into the possession of Jambavant, who resided in a cave in the forest.

This story is a beautiful message that the devotee might forget the wish he asked for, but the Almighty never forgets to grant the wish and goes to any extent and takes as many incarnations to fulfil them.