Whenever the evil dominated the Dharma of the world, The Amlmighty had to play a role in destroying the evil forces, if sometimes it was through intelligence, sometimes through war. One of the greatest batlle which taught mankind to be lways connected to Dharma was the battle of Shri Ram and Ravan of the Ramayan mentioned in the Yudh Kaand. In this process, Shri Ram does the even greater task of establishing ideals for an individual, family and a society. Shri Ram’s mission was to teach an ideal way of human life, and he did so in each and every aspect of the Ramayan. 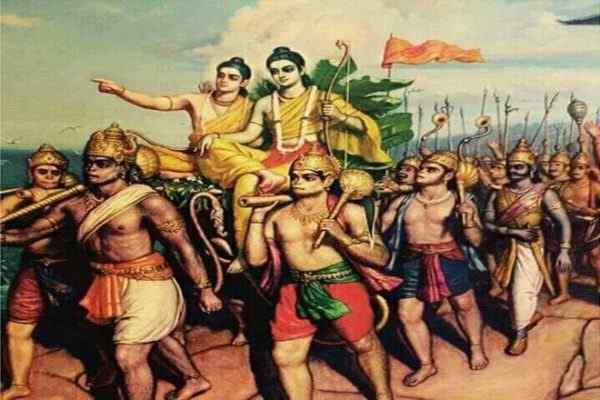 The Yuddh Kaand when looked in the deeper sense teaches us the major life lesson of overcoming problems with confidence and courage. It teaches us team work, faith and self-confidence and moral values. Every character in this Kaand display individual strength and confidence in tackling the enemy forces. Be it the march for battle where the monkeys all conquer great paths of mountains and forests, or the Setu Bandhan in five days, they teach us the nothing is impossible if one has conviction.

Planning is a beautiful lesson which we learn from the Yuddh Kand. To attack a city which is geographically secured and protected by the greatest demon warriors is not an easy thing. But Shri Ram with the support of Vibhishan and Sugriv does the perfect planning and attacks it. Shri Ram teaches us that as a leader, it is equally important to put faith in the team and listen to their ideas and advise for success in a task.

The Yuddh Kaand teaches that each and every individual has a talent for what they are born. Shri Ram displays outstanding warrior skills and kills many of the major demons who were difficult to subdue. Along with Shri Ram, Lakshman, Hanuman, Sugriv, Angad and many more display their capabilities as warriors and implement the right tactics in conquering the enemy. Shri Ram never doubts his warriors and encourages them at each in every point of battle. This increases their confidence and they emerge victorious. Shri Ram outstanding leadership skills are bought in full glory in the battle of Lanka.

Fulfilling Dharma is not confined to only men, but also the demons, and Kumbhakarn proves that being a demon, one can be virtuous too. Kumbhakarn clearly criticises Ravan for his evil deed of abducting Mata Sita , giving out the message that Dharma is not confined to set of people, but it is the people’s perception to follow it or not. Indrajeet’s devotion as a son, Mandodari’s wise advises throw light on many of the Neeti Sastras and duties of a father, husband and a king, all, which Ravan fails to comply.

The Yuddh Kaand is an ocean of confidence and teaches the grit for human to fight the battle of his life. Shri Ram inspires mankind to overcome this battle through faith in Shri Ram and belief in the ideals of courage, confidence, faith and love. Hanuman inspires to overcome the greatest of problems with faith. Be it getting the mighty eagle Garud to release the Naagpaash coils of Shri Ram and Lakshman, or uprooting the mighty Drona Mountain to get the divine herb of Sanjivin, Hanuman teaches us that faith can move mountains. Mata Sita exhibits the will power of a woman and proves that a woman is no less to a man in following the ideals of Dharma. The emotional welcome of Bharat to Shri Ram depicts pure and unconditional love of both the brothers for each other.