Shri Hanuman is the benevolent one whose name chant shies away all ill effects. He blesses his devotees with good luck, prosperity, success, health and peace. The worship of Hanuman is believed to keep one away even from the ill effects of Shani Dev as he was helped by Hanuman in one occasion.

Ravan who conquered the three worlds with his invincible boons and power put all the Nava Grahas under his command and made them his slaves. Ravan ordered all the nine planets to lie on their chests and placed his feet on their backs and made them prostrate to him, thus ruling them with his ego and arrogance.

When Meghnad was about to be born, Ravan orders all the planets to place themselves in a favourable position so that Meghnad becomes invincible. But the Devas got worried that if such a thing would happen, then Ravan could never be defeated. Devraj Indr asks the Nava Grahas not to do so, but the Nava Grahas fearing Ravan’s anger deny Devraj Indr’s request. However, Shani (Saturn) mentioned that if he could glance at Ravan, then his ill effect of Shani Dhristi (glance) could fall on Ravan and begin hardships in Ravan’s life. But, as he was crushed under Ravan’s feet, he wonders as to how he could have a glance at Ravan.

Devraj Indr requests Rishi Narad to help Shani dev in his cause. Rishi Narad agrees and goes to Ravan. Once he enters Ravan’s darbar, he praises Ravan and his powers till Ravan’s ego is satisfied. Then Rishi Narad instigates Ravan’s arrogance by saying that a conqueror does not stamp the Nava Grahas on their backs, but hits them on their chest. Ravan falls for Rishi Narad’s praise and asks the Nava Grahas to turn and lie on their back. As soon as Shani dev turns, he casts a glance on Ravan and thus the ill effects of Shani Dev start on Ravan. Realising this, Ravan locks Shani in a dark room with no windows. 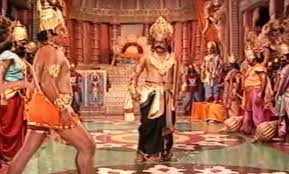 Time passes, and one day Hanuman comes to Lanka in the form of Ravan’s bad luck. He starts blazing the Golden city of Lanka in fire. While roaming around, Hanuman finds somebody shouting from a dark room. When Hanuman opens it, he finds Shani dev in it. Hanuman frees Shani dev and bows to him. Shani dev is pleased with Hanuman, but is worried that as he has seen Hanuman, the gentle monkey would suffer from his ill effects as none could escape Shani Dev’s influence. When Shani Dev tells the same to Hanuman, Hanuman asks him that to mention the ill effects he would suffer. Shani Dev answers that his wife and children would suffer, and Hanuman answers that his entire life is devoted to the lotus feet of Shri Ram and there is no place for any family in his life. Shani Dev is mighty pleased with Hanuman’ devotion and grants Hanuman to ask for a boon. Hanuman asks nothing for himself but requests Shani Dev not to affect his devotees who worship him. Shani dev agrees and blesses Hanuman with the same.

As a result of Hanuman’s benevolent gesture and boon of Shani Dev, a devotee of Hanuman is never bothered by Shani dev and is far away from his ill effects. Hanuman thus protects all his devotees and his worship brings all good health, success and prosperity.